The ultimate goal of Smart Home is to increase the quality of life and security. Smart Home is no longer a vision but has become an integral part of our lives. When we leave home in the morning all doors are being automatically locked and a smart security system protects our valuables. When we return home after work our houses are already well-tempered and the LED lightning creates a welcoming atmosphere. Alexa provides us with the news of the day before we ask her to show the latest episode of our favourite series on Netflix. So how does Smart Home compare to Smart Perimeter? 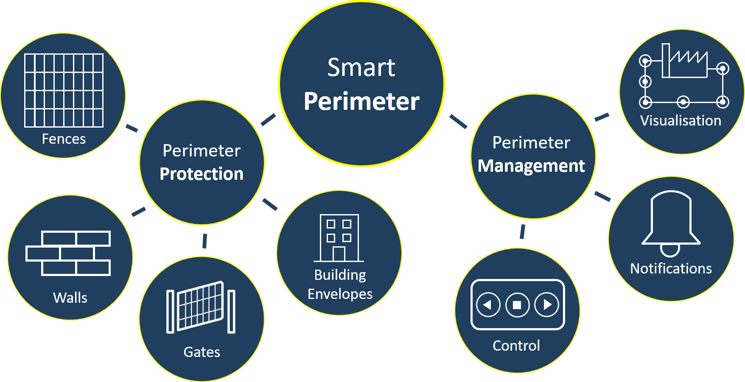 The goals of Smart Perimeter and Smart Home are very much alike. It is all about high automation, less frustration and high security. Surprisingly, the truth is that the perimeter is nowhere as secure or automated compared to our private homes. In fact, Perimeter Protection often consists of outdated security systems that include blind spots and are easy to overcome. Perimeter Management still relies on various isolated systems with little ability to talk to another. But all this is about to change with Detection Technologies' Smart Perimeter Solution, a unique system that neatly integrates Perimeter Protection and Perimeter Management.

Besides these changing threats, safeguarding the perimeter security system against failures has become a hot topic. Ideally perimeter security incorporates a redundant architecture, meaning that even if individual system components fail, the overall perimeter protection must be ensured. Detection Technologies has noted these needs on perimeter security and responds and will introduce an all new perimeter intrusion detection system (PIDS) called MultiSense at London Security Expo.

In the same way that Smart Home has eased managing our day-to-day lives, we have identified a need for corporate Perimeter Management to keep up. But rather than connecting kitchen appliances, Detection Technologies will connect all your Perimeter Protection products such as gates, boom barriers, turnstiles or bollards. Feel free to pay us a visit to find out what significant value this creates for your Perimeter Management.

"We really re-invented the wheel this time. Our team has developed our new Smart Perimeter Solution from scratch with a focus on security, flexibility and usability. The aim was to create a system that not only secures the perimeter against physical and cyber-attacks but also allows managing it intuitively."

Do you want to find out more about Detection Technologies' Smart Perimeter Solution? You are very welcome to visit us on stand C71.